Cilantro is also known as Coriander

Cilantro is also known as Coriander and/or Chinese Parsley. Cilantro is found naturally in Southwest Asia, North Africa, and South Europe. It grows in plant form and at maturity can be two feet tall. Cilantro is the Spanish word for coriander. It is the term of choice in North America for coriander leaves, and used extensively in Mexican Cuisine. 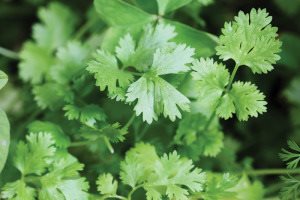 The entirety of the Cilantro plant is edible, but the fresh leaves and the dried seeds are the parts most traditionally used in cooking. They contain phytochemicals which delays or may prevent the spoilage of food seasoned with this spice. The leaves have a different taste than the seeds, with citrus overtones. Many people experience a soapy taste or an unpleasant smell and avoid the leaves for that reason. The fresh leaves are an ingredient in many Indian, Chinese and Thai dishes. Mexican cooking features Cilantro in salsa and guacamole. Heat damages the flavor of cilantro leaves. Because of this they are often used raw or added to the dish immediately before serving. Cilantro leaves spoil quickly when removed from the plant, and lose their aroma when dried or frozen.

CIlantro GarnishPeople can perceive the taste of cilantro leaves differently. Those who like it say it is refreshing. They say it has a citrus flavor like lemons, limes, and oranges. Those who dislike the flavor and aroma describe it as soapy. Very few are undecided about cilantro and its aroma and flavor. Genetics are found to play a big role in our ability to appreciate aromas and flavors. If you enjoy an occasional margarita and like salsa and chips you are certainly enjoying cilantro. 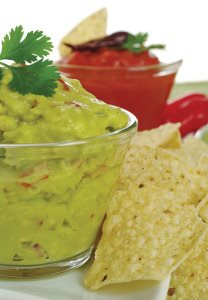 The dry cilantro fruits are known as coriander seeds. These seeds have a lemony citrus flavor when crushed. This flavor has been described as warm, nutty, spicy, and orange-flavored. Coriander seeds were found in the tomb of the Egyptian Pharaoh Tutankhamen. This leads our historians to conclude that Cilantro was grown or traded for by the Egyptians and they valued it dearly.