Garlic is closely related to the onion, shallot, and leek. It has had an ongoing relationship with Humans for over 7,000 years. It is native to Central Asia, however, grows all over the World except in extremely cold climates. China is responsible for the growth and production of 77% of the World’s output. That translates into Twenty-Three Billion pounds a year. The Vampire population has been diminished dramatically in China over the past Century with this prolific growth in China’s Garlic production! This spice is Global in its usage and is popular for its pungent flavor as a seasoning and condiment. It is hard to imagine not having this extraordinary spice in our American kitchens.Garlic Bulbs 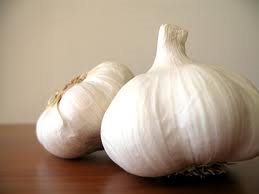 Primarily the Garlic Bulbs are consumed and they mellow and sweeten noticeably with cooking. Garlic is a fundamental component in many dishes from nearly every world region, especially Eastern Asia, South Asia, Southeast Asia, the Middle East, Northern Africa, Southern Europe, and parts of South and Central America. The flavor varies in intensity and aroma dependent upon different cooking methods. It is often paired with onion, tomato, & ginger. In Korea, heads of garlic are fermented at high temperature; the resulting product, called Black Garlic, is sweet and syrupy, and is now being sold in the United States, England and Australia.

Garlic may be applied to different kinds of bread to create a variety of classic dishes, such as garlic bread, toast, bruschetta, crostini and canapé. Oils can be flavored with garlic cloves. These infused oils are used to season all categories of vegetables, meats, breads and pasta. This world class spice and seasoning comes in many forms other than oils. It can be found nearly everywhere in America in many forms such as powdered, salted, chopped, whole, juice, and minced. This is just a few. Try it with Parsley Too!