Black Pepper is a flowering vine harvested for its fruit known as a peppercorn when dried and used for a spice. It is then ground from these peppercorns is most commonly referred to as Black Pepper and is unripe peppercorns cooked and dried.

Viet Nam and India dominate the growing of Pepper and account for well over 50% of the Worlds production. Black Pepper is the Worlds most traded spice and accounts for one fifth of the Worlds spice trade, and has been sought after and traded for over 4,000 years. And you thought you were getting old! Feeling younger already, aren’t you? Me too!

The Pepper plant is a perennial vine with a woody texture and needs the support of neighboring trees, trellises, climbing frames, or poles. Fifteen (15) feet is not an uncommon height for this plant to top out at with some support assistance. This vine spreads easily and takes root where ever the trailing stems come in contact with the ground. The fruit of the Black Pepper plant is called a “drupe” until it is dried when it becomes a peppercorn. These plants needs to be grown in rich soil that is not susceptible to flooding and does best when it is grown under 2,500 feet above sea level. Cuttings are planted and take root easily making the most popular spice crop in the world not difficult to maintain. Cuttings are chosen for quality, as well as, quantity of the yield. The drupe lives approximately a dozen years and actively produces fruit for the last six (6) to eight (8) years of its life.

Long before oil had been discovered in Saudi Arabia, pepper was considered the original “Black Gold”. It was used as collateral, currency, medicine and a preservative. Peppercorns were discovered stuffed in the nostrils of Ramesses II; placed there as part of the Egyptian mummification process shortly after his death in 1213 BC. Black Pepper was an expensive, widely used, and well known spice during the Roman Empire. This spice was a staple ingredient in most Roman recipes and clearly a favorite in the finer and more expensive homes of Rome. Affordable only to the wealthy and politically connected, Pepper was truly a luxury item within the Roman Empire. 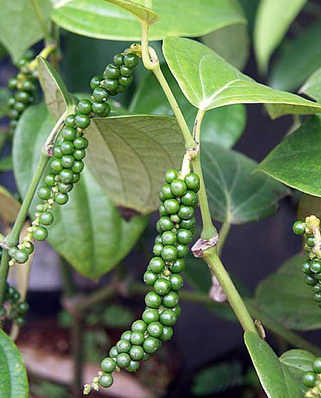 Italy had such a strangle hold on the overall Spice Market in the 1400’s that they inspired Portugal to embark on a quest to find a new trade route of their own to India. In 1498 Portugal succeeded when Vasco da Gama became the first explorer to reach India by sailing around Africa. Pepper supplies began to increase for Europe in the Middle Ages and consequently the price dropped making it more attainable for the common man and the use of pepper has grown worldwide since that time, making it the most widely used spice in the World today. World consumption of Pepper is approximately 300,000 tons annually. This spice is widely used throughout the world and most commonly coupled with salt.

Pepper is so widely used in America that an explanation of when and how much to use is strictly left up to the user to decide. Same thing goes as for what foods go good with Pepper. You decide . . . Go ahead.