Sesame seeds come from a flowering plant and is very drought tolerant. It will grow where many plants cannot survive. It is widely found throughout the Middle East and most Tropical regions. Sesame is grown and harvested for its seeds which grow in pods. The Sesame seeds contain oil which has made it a long standing staple in the Middle East for over 3,000 years. It is the oldest known oil producing seed in the world. Ancient presses for Sesame oil have been discovered in Egypt that are thousands of years old. Sesame seeds have one of the highest oil contents of any seed. It has a savory nutty flavor and is used in cuisine throughout the world. 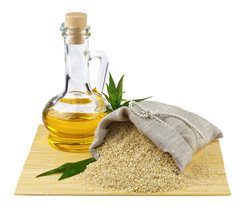 The Sesame seeds are very small and usually flat. There are thousands of known varieties and they are available in many colors. Some are sold without their jackets and are widely used in the developed nations on top of buns. Burma, India, & China are the three top producers of Sesame seeds.

The Sesame seeds are often added to breads, bagels, and America’s favorite “on top of hamburger buns”. Nearly 75% of Mexico’s Sesame seeds crop is purchased by McDonalds for placement of those seeds on top of their hamburger buns. In Asia you can find sesame seeds in sushi, salads, and some baked snacks. Asian tempura restaurants use the oil to mix with cotton seed oil for deep frying. They also use the oil for marinating meats and vegetables.

Many African countries use ground Sesame seeds to flavor their soups. It goes very well with smoked fish and lobster as well. In South Carolina you will find Sesame seed cookies and wafers. It is believed to have been brought to America by slaves in the 17th century. It can be found in the form of candy in Japan while Mexico loves it on their breads. In Italy you will find a Christmas food made with Sesame seeds and oil. Remember it has a nutty full bodied flavor. Try it the next time you experiment with your meals. Your family will think you have taken cooking lessons if you participate in all the recommendations from this “Spice of Life” blog.